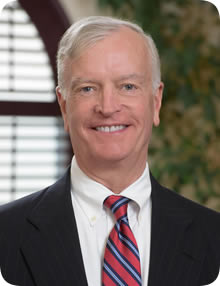 Mark P. Buell is a fellow of the prestigious American College of Trial Lawyers, a recognition achieved by less than two-tenths of one percent of Florida lawyers. He is Board Certified by The Florida Bar in two separate areas: Civil Trial Law and Business Litigation Law. He is also Board Certified by the National Board of Trial Advocacy as a Civil Trial Lawyer. He has tried many jury trials and has actual jury trial experience in a variety of cases in state and federal courts, including condemnation/eminent domain, personal injury, product liability, insurance coverage, title insurance and business fraud. He has been named to the prestigious list of Top 100 Lawyers in Florida.

Mark has been published on a variety of topics, including eminent domain, jury selection and liability for inadequate security. He has spoken at local and national seminars on eminent domain and trial-related topics.

Mark has tried jury and non-jury trials in state and federal courts throughout the State of Florida including Tampa, St. Petersburg, Sarasota, Naples, Melbourne, Miami, Bartow, Jacksonville, Ocala, New Port Richey and Dade City, among others.

On a personal note, Mark has been active in his local church and volunteers at the elementary school where one of his daughters teaches second grade. He is an avid college sports fan and enjoys traveling with his wife.